Every time you order food or buy clothing on an e-commerce platform, receiving rewards in either the form of cashback or discount makes you happy. It is a simple win-win scenario for all the parties involved, the merchants see an increase in sales when they offer cashback, and the user gets a cashback in his wallet which can be reused to purchase other things. But what if you are promised a ‘Bitcoin’ in the form of rewards for every transaction you make on these apps? This is exactly what a Bengaluru-based platform is doing.

Mohammed Roshan and Roshni Aslam, founders of Bitcoin rewards platform GoSats, are incentivising Bitcoin to Indians for simply making purchases online. The platform features more than 120 apps including Flipkart, Amazon, Swiggy, Big Basket and Myntra, and claims to have 1,50,000 users onboarded to date.

Using GoSats is quite simple. There are two ways users can shop on the platform: One, by purchasing brand vouchers – and then using these vouchers on the respective brand’s online/offline store, and second, by directly shopping within the app as on any e-commerce platform.

“Rewards programmes motivate consumers to receive benefit from spending their money with a brand. There’s a psychological pull that most consumers do not — and sometimes cannot — resist,” Roshan tells indianexpress.com. He calls cashback ‘Satback’. It means cashback given in the form of Satoshis. Satoshis is to Bitcoin what paisa is to the rupee, 10 Crore Satoshis is equivalent to 1 Bitcoin. 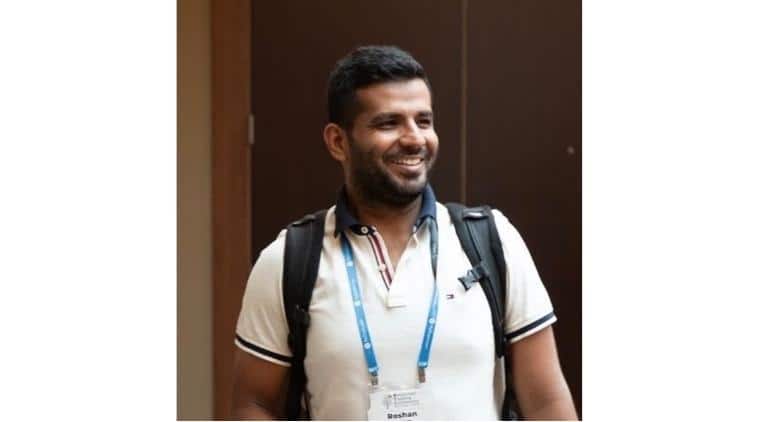 Mohammad Roshan is the founder of GoSats. (Photo: GoSats)

According to Roshan, rewards in the form of Bitcoin make more sense than any other asset because it is a “deflationary asset with a limited supply.” For a decade, Bitcoin has been considered the best-performing asset going all the way from $0.01 to $42,000 at its peak. “A consistent pattern in Bitcoin is that it appreciates with the increase in demand over a long period of time. Now compare this to any other form of cashback (INR, credit card points, airline miles, etc) and it is evident that they all lose their value over time,” he said.

The rewards given by the platform range from 5 per cent to as high as 20 per cent. The company has a simple business model. “For every transaction any user makes, it rewards the users in Satoshis, and in return, the company generates revenue and onboards new users for various D2C brands,” explains Karan Agarwal, head of product at GoSats.

Interestingly, for GoSats, crypto winter is not a bad news. “With the crypto market plunging, we have increased the reward percentage for our users. This is because the value is currently down and more Bitcoins can be brought, we are offering as high as 20 per cent Satoshis to our now,” Agarwal adds. In future, the company might allow its users to stake their rewards, which means they could re-invest their rewards and earn more incentives.

The company clarifies its stance that it does not act as an exchange. Any user who registers on the platform has to give his crypto wallet address, but for liquidating (withdrawing Bitcoin) users will have to use an exchange, according to their needs. “There is no risk involved since there is no investment of money involved, users earn Bitcoin for free when they shop online,” notes Roshan.

He believes this can be a great way for users who have just learned about Bitcoin to get their hands on their first Satoshis. “Usually students do not have a lot of money that they can deploy for investments, however, a lot of them spend a lot of money on shopping. This makes them ideal for Bitcoin cashbacks,” he adds. The platform has users in the 18-24 age group.

“I don’t think we can get mass adoption by having Bitcoin as just an investment vehicle. Instead, we need to have Crypto products that integrate into the everyday lives of people and provide value over other alternatives. Cashbacks in Bitcoin might just be the way that leads to mass adoption by giving millions of people their first Bitcoin for their everyday shopping.” Roshan says.

Cryptocurrency has been touted as the key to building Black wealth. But critics say investing is too high risk.

Cryptocurrency has been touted as the key to building Black wealth. But critics say investing is too high risk.

Does Quilvius have the potential to match Ethereum as a successful crypto?