The biggest news in the cryptoverse for Sept. 5 includes Binance ceasing support for USDC, Michale Saylor calling Bitcoin Lightning Network the most important technology and FatManTerra tricking his followers with a fake investment scheme.

Binance will stop supporting USDC, certain other stablecoins by Sept. 29

Binance will reportedly cease support for the USDC stablecoin across its platform from Sept. 29. It expects that the move will enhance liquidity and capital efficiency for users.

Binance CEO “CZ” clarified that the move does not translate to delisting USDC as users can still deposit and withdraw USDC from its platform.

Not delist. You can still deposit and withdraw USDC. Just merging all liquidity into one pair. Best price, lowest slippage for users.

Bitcoin Maximalist Michael Saylor said the Bitcoin Lightning Network is very important to the world of technology today as it will help scale BTC to billions of customers and will allow developers to build highly scalable dApps.

He also announced that MicroStrategy is developing an in-house Lightning network solution. Upon release, the infrastructure will help bring Bitcoin adoption to over 10 million customers.

In less than 2 hours, crypto influencer FatManTerra received over $100,000 from community members that fell for his fake investment scheme.

Inspired by Lady of Crypto, a while ago I pitched my own investment scheme to Twitter…

In two hours, I received over one hundred DMs. I raised 3.45 BTC from Twitter and 2 BTC from Discord – over $100k, with more requests flooding in by the minute.

But there’s a little twist.

He plotted the scheme to educate community members against falling for influencers who promise astonishing high-yield opportunities without a clear explanation as to how the yields will be generated.

U.S. Congressman Brad Sherman who has been a vocal critic of cryptocurrencies said that it is unlikely that Congress will place a ban on the crypto industry as it has grown too big with so much money and power behind it.

However, Sherman expressed pessimism that the crypto industry still poses a threat to the U.S. economy, dollar dominance, and national security.

Vitalik asked the crypto community how much they would be willing to pay for a .eth domain over a 100-year period.

What is a fair price that someone should have to pay to register and unconditionally guarantee ownership of a 5-letter .eth domain for 100 years?

The community weighed in for a fee of less than $100  as it would ensure inclusivity for more people.

Vitalik said that there is a need to implement measures that will prevent scalpers from parking domains and make it unaffordable for smaller players.

Helium down 55% in last 30 days as challenges run rife

The Helium ecosystem is battling for survival as its market cap has declined 55% in the last 30 days. The native HNT token has fallen 92% from its all-time high, with market cap declining from over $1 billion to only about $490 million.

The decline largely stems from a lack of trust in the project. It is alleged that Helium’s product has little to no demand. Community members also backed out of plans by developers to migrate its infrastructure to the Solana blockchain.

Russia to reportedly consider crypto use for international payments

Russia’s Deputy Finance Minister Alexei Moiseev said the move is to help the central bank supervise entities offering crypto services locally, as against foreign platforms that are beyond the government’s control.

Shiba Inu has a total supply of about 1 quadrillion, which explains why the project is consistently burning its token to reduce its oversupply.

According to shiba-burn-tracker.com, 329.8 million tokens have been burned since the start of September. The most significant daily burn so far happened on Aug 31, which saw 455,699 tokens burned within 24 hours.

Available data suggests that Bitcoin’s mining hash rate and price are diverging. On Sept. 4, the mining hash rate spiked to over 60% within 24 hours. The effect was that bitcoin’s hash rate reached a new all-time high.

CrypoSlate is publishing a weekly report that examines prevailing macro factors and how they affect the crypto market. Be the first to read our debut report.

CryptoSlate analyzed the HODL Waves chart to reveal that short-term Bitcoin holders are exiting the market. Historically, whenever the short-term holders fall below 29%, it is indicative that the market bottom is near. 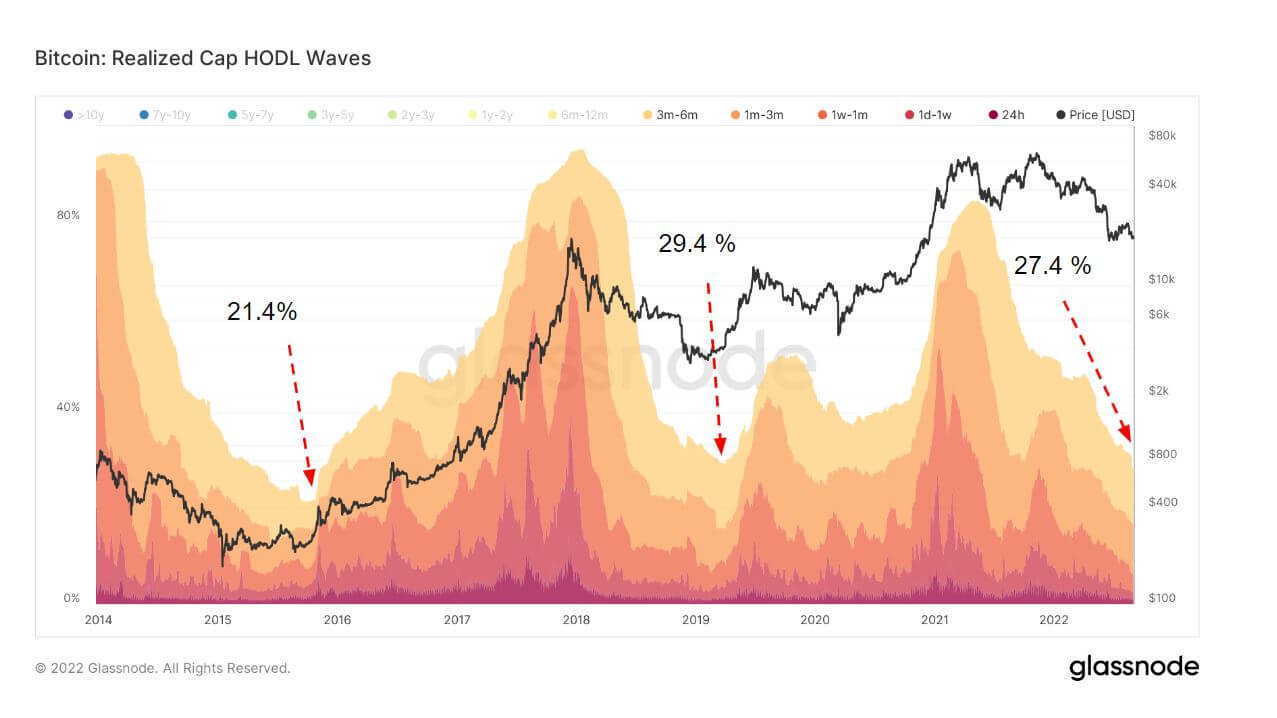 News from around the Cryptoverse

Crypto exchanges in the UK mandated to report sanctions

The UK’s Treasury Office of Financial Sanctions  introduced a new law that mandates crypto exchanges in the region to report suspected sanction violations to authorities, according to The Guardian.

The move to introduce strict rules seeks to make it difficult for Russian entities to bypass sanctions imposed by the European government.

The Australian Federal Police has formed a cryptocurrency unit that will address the use of cryptocurrency for money laundering and financial crimes, according to the Financial Review.

The move comes after the police force seized over $600 million from criminals who laundered funds using cryptocurrency since 2020.

Get an Edge on the Crypto Market 👇

A sceptic’s guide to crypto: the church of bitcoin

FTX Announces Plan To Halt Its Withdrawals During The Merge

FTX Announces Plan To Halt Its Withdrawals During The Merge

Binance to convert users' USD Coin into its own stablecoin